Who did it better!? Dr Mario or Tetris 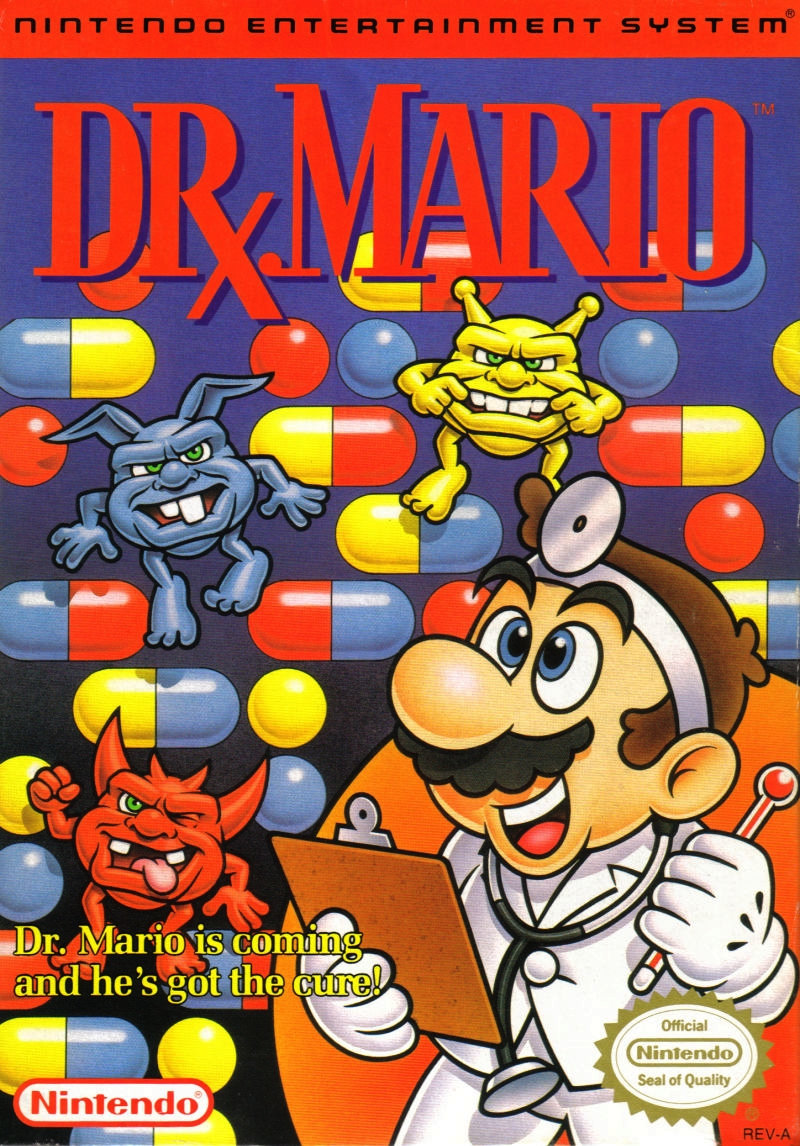 Initially released in 1990 for the Nintendo Entertainment System and first generation Gameboy, Dr. Mario brought a Tetris-like Mario game to the forefront of the gaming world, during a time where the classic puzzle game originally created by Alexei Pajitnov was taking the world by storm.

Combining the elements of the Mario universe, Dr. Mario was easily one of the greatest Tetris knock offs of it's generation, which explains why the game has been continuously in production since 1990 to 2014.

The NES and Gameboy Advance versions of Dr. Mario are essentially the same, players work as Dr. Mario to toss multicolored capsules into the play arena, matching the colors with the viruses that are either red, blue or yellow. When the viruses and stacked capsules match in color, the row is cleared. It takes at least four of the colors in the vertical or horizontal directions to clear the row. Like Tetris, players lose the round if the capsules stack to the top of the screen, and combinations are rewarded with extra points. Each stage is beaten when all the viruses have been eliminated. 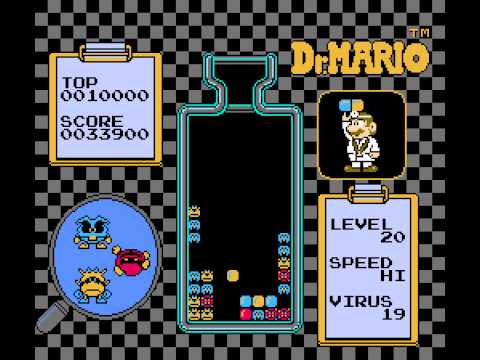 As the player progresses through each stage, more and more viruses enter and the capsules fall at a higher rate of speed. Much like Tetris, this game requires increasing levels of concentration and wit. And despite being nearly the same game as Tetris, Dr. Mario was well received by the gaming community for having good graphics, challenging gameplay, and a solid soundtrack.

Let's talk about the graphics of Dr. Mario. The screen is a basic, NES stereotype in terms of overall looks. Dr. Mario can be seen within the screen, wearing the typical white Doctor's coat and stethoscope, as he tossing vitamins into the playing area. To the lower left are the viruses, grimacing as they sit in a petri dish. The high scores and level boxes are contained within a clipboard, a cute, and accurate part of any Doctor's visit. The game features some unique audio, although there isn't a whole lot of soundtracks for the game.

A notable addition to Dr. Mario is the ability for multiplayer gaming. Assuming the players have wireless adapters or a Gameboy Advance link cable, they can play matches together. The gameplay is the same as single player mode, with the exception that the player's now compete to clear the level first. 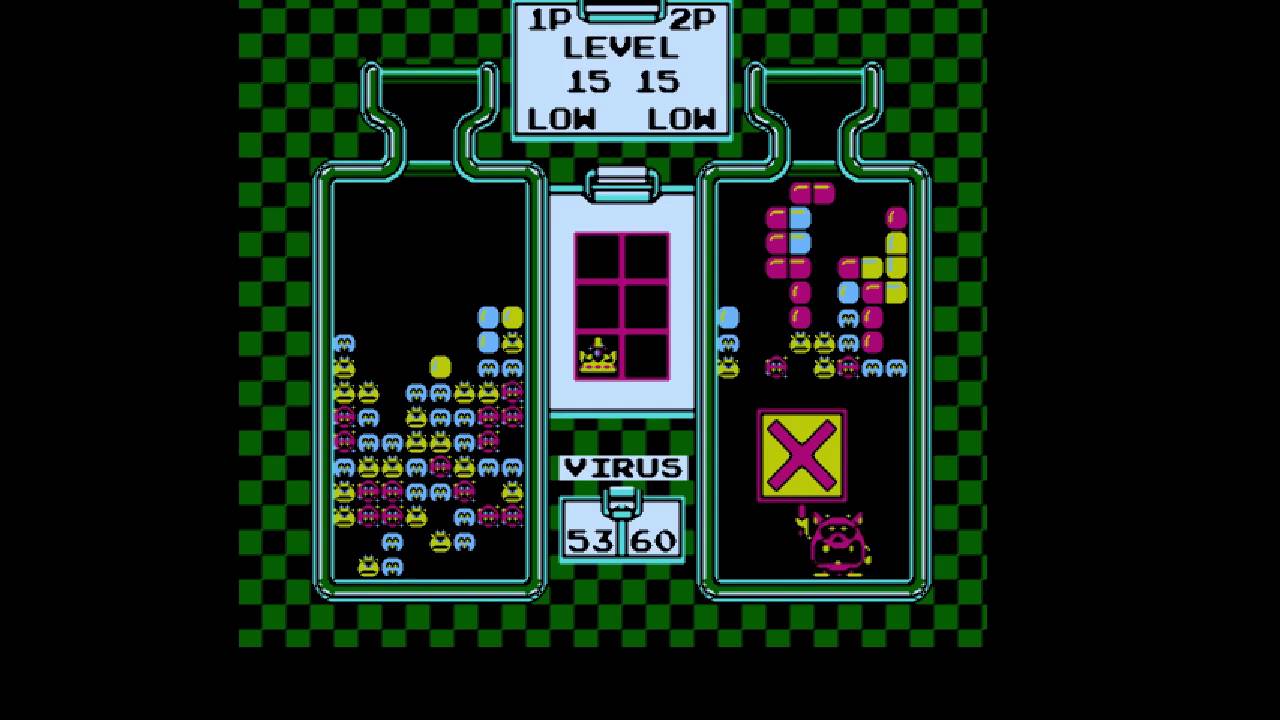 Overall, Dr. Mario is a well produced Tetris-style game. It's catchy, addictive and cute, and isn't completely ripping off the Tetris name. But is it the greater of the two games? Is Dr. Mario a Tetris clone that actually does puzzles better than the classic? We will answer this, but first we need to review the Godfather of Puzzle classics, Tetris.

Almost everyone has played Tetris at some point or another, and certainly every gamer has played it. Players work to rotate the falling blocks, which fall in a random sequence. They must make smooth, horizontal lines, which disappear when properly made. After a certain number of lines have been made, and disappeared, the stage is cleared. The levels get harder and faster over time. This is the core element of the Tetris game. The game is hailed for its simplicity, and has even been shown to improve brain efficiency, as well as reduce the frequency of flashbacks caused by Post Traumatic Stress Disorder. Tetris has also been shown to help those battling substance abuse addictions and improve eye strength. 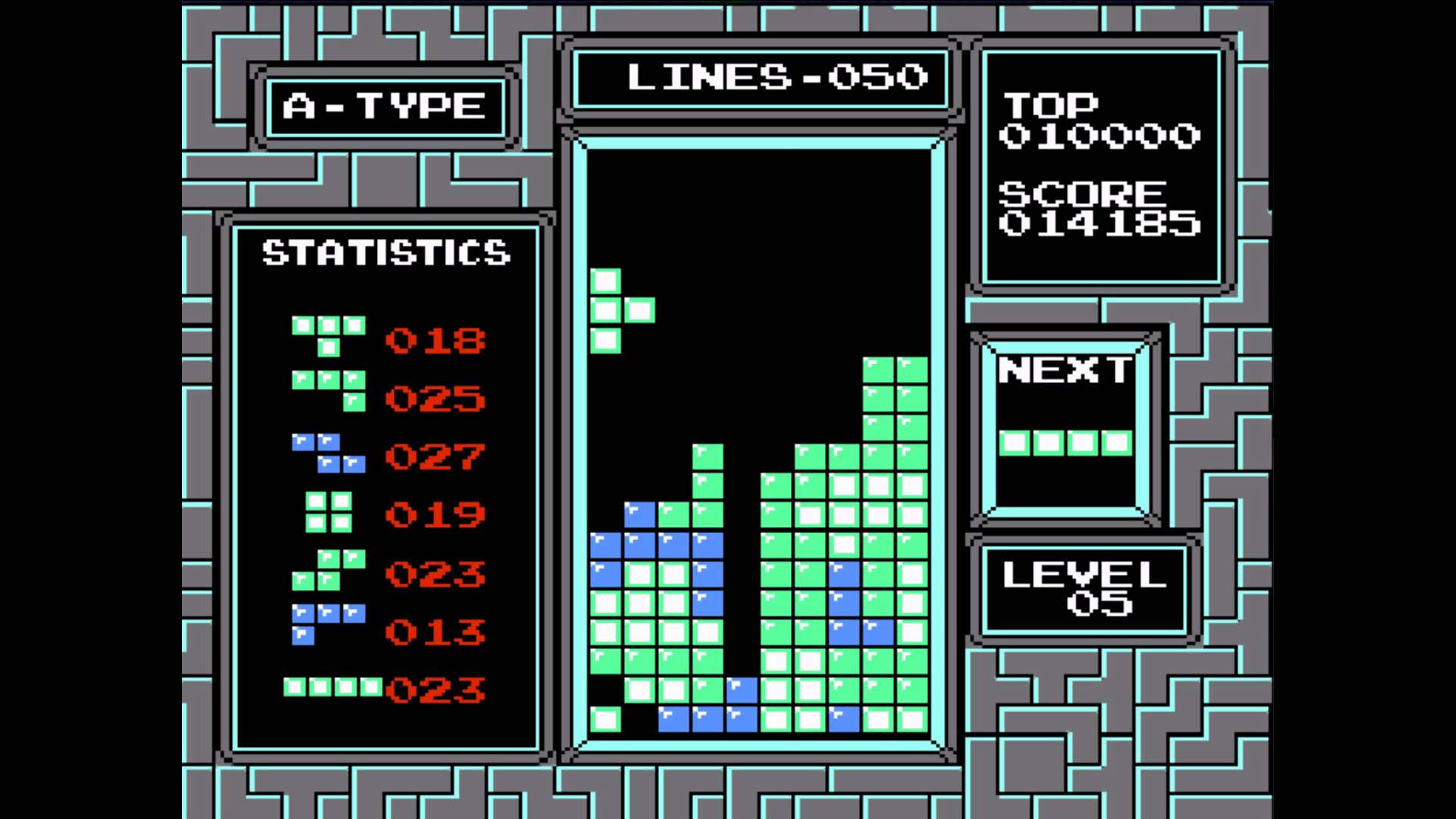 Nintendo called this game the fifth greatest Nintendo game of all time, and since the original, Tetris has been released in multiple forms, with each edition allowing for a wide variety of playing styles to be covered. To this day, Tetris has been distributed nearly two hundred million times, it is arguably the world's most successful video game.

Tetris can currently be played on the PlayStation, Gameboy, Super Nintendo, Dreamcast, PC, Nintendo 64, Xbox 360, the Nintendo Switch, Wii and basically any and every console imaginable. And there's variants as well that feature extra playing modes, online multiplayer and a lot more. Tetris is the puzzle game to end all puzzle games, and it will never fade from the video gaming universe.

Simplicity at it's ultimate level, Tetris allows gamers the chance to make straight lines out of rotating block pieces. Sounds dorky, sounds boring, but it's far from that. The simplicity of Tetris is overshadowed by the concentration and skill it takes to truly master the game. The levels continuously get faster with each stage, and gamer's need to be incredibly fast to beat all the levels in this game. 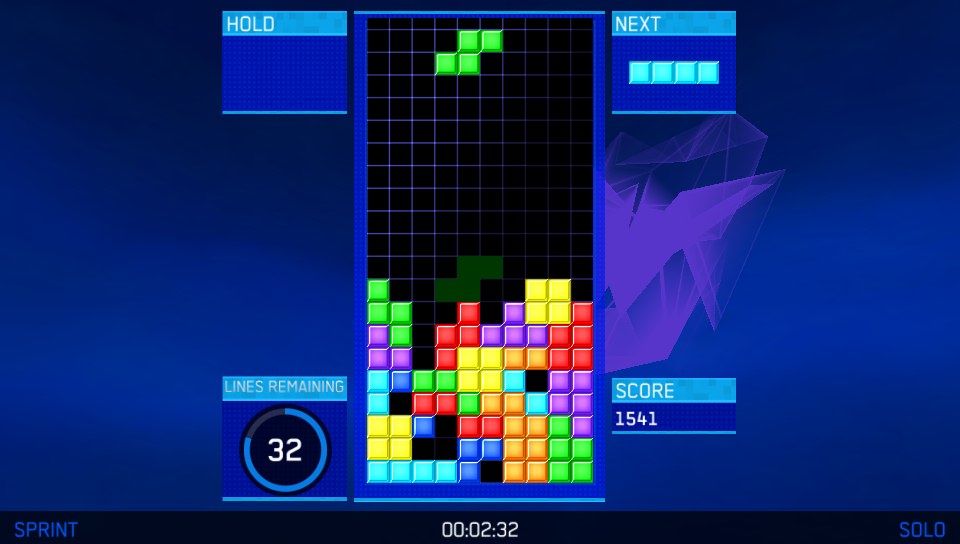 Like Dr. Mario, Tetris features multiplayer mode between Gameboy devices, granted one of the players has a link cable. Between the handfuls of consoles that Tetris plays on, the game is suitable for any gamer and nearly any gaming system imaginable.

But we have to go back to the simplicity of Tetris. This game has huge replay value and has been a continued success for over thirty years in the video game world. That alone speaks volumes. Tetris seems to be just as popular now as it was a few decades ago. Tetris is timeless, and such a great game that no developer will every let slip into the shadows.

Which Game Does Puzzles Better?

Examining Tetris and Dr. Mario, the choice is obvious.

Dr. Mario is a Tetris clone. Although the game is cute and somewhat unique, it's still just a Tetris knockoff. Nintendo clearly wanted to create a game quickly that could ride the wave created by Tetris, and they knew that including Mario would draw a lot of gamers into Dr. Mario. However, the game just can't compare to the original quality that Tetris brings to the puzzle genre.

Tetris is a phenomenal puzzle game. In it's simplicity, it features highly addictive gameplay. The evolution of Tetris over the years have brought many different play modes, soundtracks and animations into the mix, and the game's multitude of forms offer something for each player. 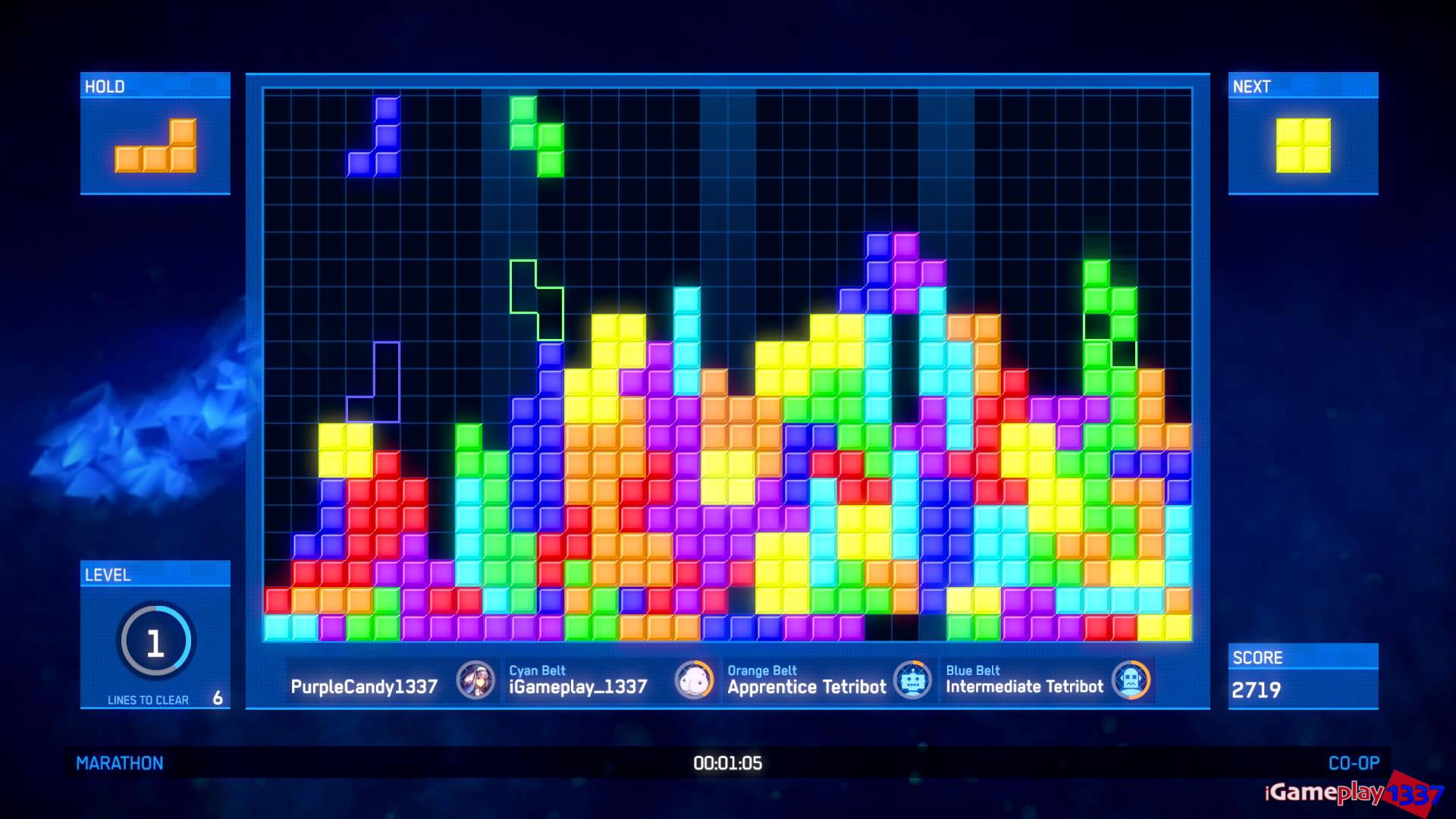 Tetris has a far more playability than Dr. Mario. This goes back to simplicity again, Tetris is simple enough for any range of gamers to just pick it up and start playing. Dr. Mario is Nintendo's attempt at capitalizing off the success of Tetris and adding the Mario player as a gimmick. It's still a wonderful game, but even Nintendo sees Tetris as the better puzzle video game.

In terms of sales, Tetris knocks Dr. Mario out of existence. Dr. Mario has sold around six million copies. Now, compare that to Tetris and nearly two hundred million copies sold. Granted, Tetris has been around for a bit longer than Dr. Mario. The popularity of Tetris is in no way a sheer streak of luck. The game is good, far too good for how simply it is. But it's everything to be expected in a puzzle video game and without a doubt sets the standard for the puzzle based genre.

Reply Encophy
5:53 AM on September 17, 2021
https://buylasixshop.com/ - can you buy furosemide over the counter