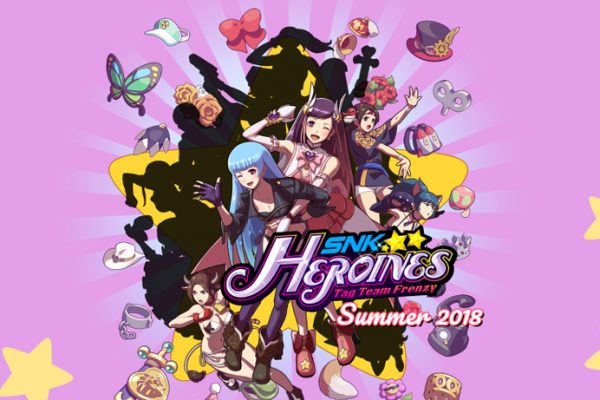 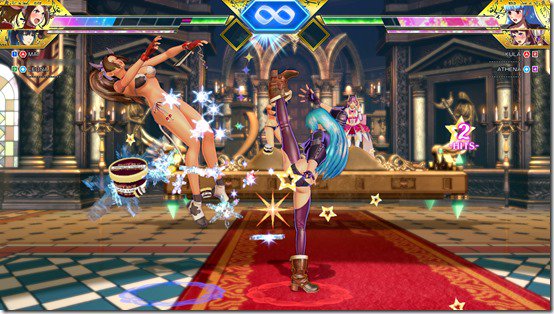 With that said, some people might be wondering whether SNK Heroines: Tag Team Frenzy can be considered degrading towards women. There is nothing wrong with the basic concept, but considering the prevalence of female fighters' skimpy outfits in fighting games, it should come as no surprise to learn that there are solid reasons to believe that this is indeed the case.

First and foremost, SNK is like most fighting game developers in that it has had both hits and misses when it comes to the designs of its female characters over the course of its existence. For proof, look no further than Blue Mary, whose designs have ranged from the reasonable to the ridiculous. For example, her earlier designs were not unreasonable, featuring clear musculature with a sleeveless top and long pants. Combined with a pose that exuded a sense of confidence, the result was a character who looked like she'd be able to compete in a fighting tournament. There is still a bit of silliness in the form of an extraneous belt, but that's just it, it's nothing but a bit of silliness.

In contrast, Blue Mary's later design from KoF: Maximum Impact Regulation A was nothing short of horrendous in more than one sense of the word. For those who haven't seen it, it sees the character stuffed into what is best described as a bikini combined with heavy boots as well as the mutant offspring of denim cutoffs and assless chaps, completed with two enormous bunches of hair as opposed to the simple but nonetheless serviceable haircut that she had before. To top it off, the artwork saw the character standing in a bizarre pigeon-toed pose, which made the whole ensemble that much more ridiculous in appearance. With that said, even Blue Mary's earlier appearance was far from being problem-free, seeing as how SNK had gone to the trouble of giving her animation bouncing breasts. 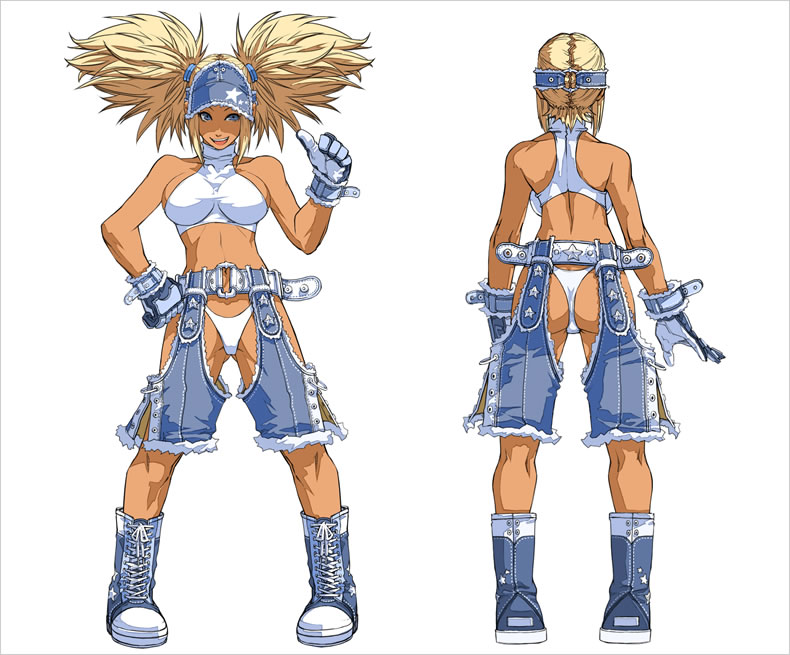 Based on the small amount of marketing material that has been released for SNK Heroines: Tag Team Frenzy so far, the designs are better than Blue Mary's bikini and assless chaps combo but still more than a little bit problematic. Some of the costumes are fun and harmless, with an excellent example being a shot of Athena wearing a clown nose as well as a mushroom hairband. In contrast, other costumes are much more questionable, with examples ranging from Athena in a bikini with outstretched arms as though about to embrace someone to Leona in her usual bikini top but with the addition of cat ears as well as cat paw gloves. Meanwhile, there is more than one shot of Mai Shiranui wearing a cow headband, a cowbell collar, and a cowprint bikini, though to be fair, this is not actually that much worse than her standard costume.

After all, Mai Shiranui is the one whose standard costume looks as though she is one second from falling out of her costume, which isn't much more than a bikini and a loincloth. Perhaps unsurprisingly considering Blue Mary's animation, it should come as no surprise to learn that Mai Shiranui's animation tends to incorporate bouncing breasts as well, which looks like an incredibly bad idea for someone who is supposed to be getting into serious fights with serious things on the line.

Summed up, SNK Heroines: Tag Team Frenzy is looking as though it can be considered degrading towards women, though it will have to come out before a full assessment can be made. It doesn't look quite as bad as some of the other fighting games that have been released over time, but to be perfectly honest, that says a lot more about the general state of female fighters' skimpy outfits in fighting games than anything else. This is a real shame because fighting game developers have shown an ability to create interesting female fighters without sexualizing them needlessly in the process, with an excellent example being Hisako from Killer Instinct.

Reply baincialK
8:53 AM on September 15, 2021
is furosemide potassium sparing