Is Oceanhorn a parody or rip off of Zelda?

Oceanhorn has been described as the mobile version of Zelda. Seeing as Nintendo has yet to bring some of their beloved classics to the smartphone/tablet platforms, other developers have stepped in, trying to tap into a seemingly open market.

The game has the visual appeal to draw mobile users to download. Oceanhorn has vast, open seas with beautifully glassy water, dark boss covered dungeons, and cute island experiences. What the game lacks, however, is originality.

It would certainly appear that Oceanhorn draws inspiration from The Legend of Zelda franchise. So much so that the words, "rip off, clone, parody and knock off", have all been used to describe the mobile game's entirety. The game features similar art styles and gameplay to the Windwaker game. Oceanhorn allows players to sail around just like Windwaker. No, seriously, it's almost an exact copy in this aspect. Oceanhorn even has items that remind us of Zelda, specifically the heart pieces and master key items. 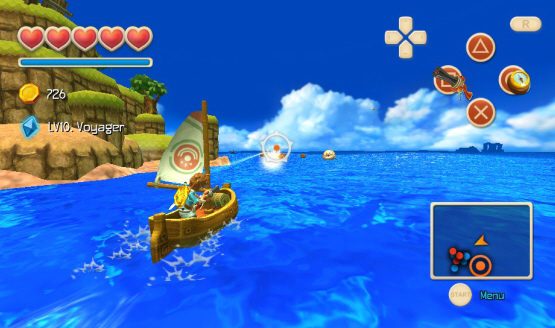 It's a bit shocking that Nintendo hasn't stepped in to sue the creators of Oceanhorn, FDG Entertainment, for blatant copyright infringement. The issue here is that Oceanhorn is making money off of, and drawing fans away from Nintendo's original creation.

Ok, so we've established that Oceanhorn is a Zelda rip-off, how does it stack up against the famous franchise? Not well, which is to be expected.

Nintendo is an absolute master at video game ingenuity and genius, which Oceanhorn contains not a speck. The flaws with Oceanhorn are clear and easy to spot. Oceanhorn features puzzle gameplay that is extremely repetitive and not challenging in the least bit. If anything it's brainless gameplay, you might actually feel dumber after a playing Oceanhorn. And that's assuming you don't give up from the controller layout. 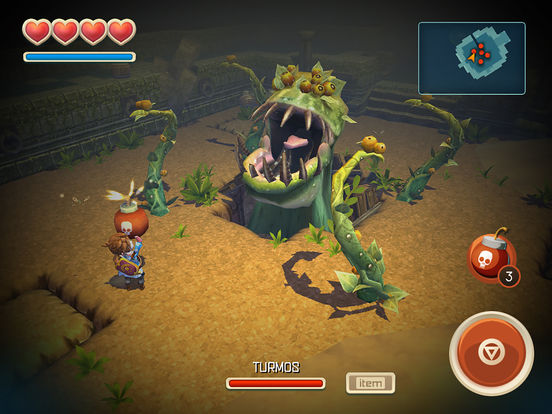 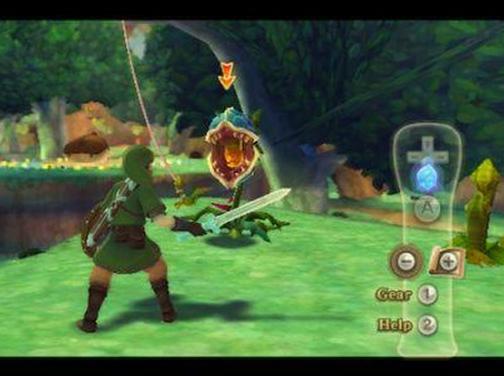 First issue, the controls are built into the touchscreen. While some games have perfected the art of immersive touchscreen gameplay and controls, Oceanhorn is a reminder of what it means to rage quit. A single action button has multiple uses, anything from picking up and throwing pots (hmmm, sound familiar?), to swinging the sword. And suppose you need to fight an enemy who is right by a pot? You'll find the character interacting with the item, and thus losing the fight because you couldn't swing your sword and pick up the pot at the same time.

And then there's the actual combat element. Enemies are not designed with integrity. Some bad guys may take a few sword strikes to be defeated, and later on the same enemy might be killed in a single blow. There's no indication within the game to explain this, so players can only assume it is a bug from the poor, and probably rushed game development.

Assuming you could even hit your enemies, that is. The foes in Oceanhorn will occasionally get stuck halfway in the ground. You won't see them, or be able to hit them, but they can kill you. Items and objects will also glitch around the game, fans have noted that objects being thrown hover halfway in mid-air before getting stuck.

So it's not even that Oceanhorn is a Zelda knock off, Oceanhorn is the cloned game we never wanted or could even hope to enjoy. Which is disappointing because for a mobile game, the screenshots look phenomenal. The vast world, artistically styled and detailed with charming characters yearns for exploration. The game features a beautiful soundtrack designed by Kalle Ylitalo. So it becomes clear that Oceanhorn did the best it could in terms of production. But it will never hold a flame to the Zelda franchise and Nintendo at that.

Oceanhorn needs a good combat system with excellent controls. The dungeon gameplay needs a complete reworking, and above all it just needs to be original.

Instead, Oceanhorn is a rip off. Oceanhorn copies Zelda in horrible fashion. This game is click bait personified. What we have is a game that mobile users will look at and think, "Hey, this looks just like Windwaker, cool!" and then download only to find out that the game could never be Zelda. This game is a senseless, frustrating experience, a downright illogical experience and horrible addition to the realm of video games. A minute glimpse of the purity of disappointment. It needs to go to game design rehab.